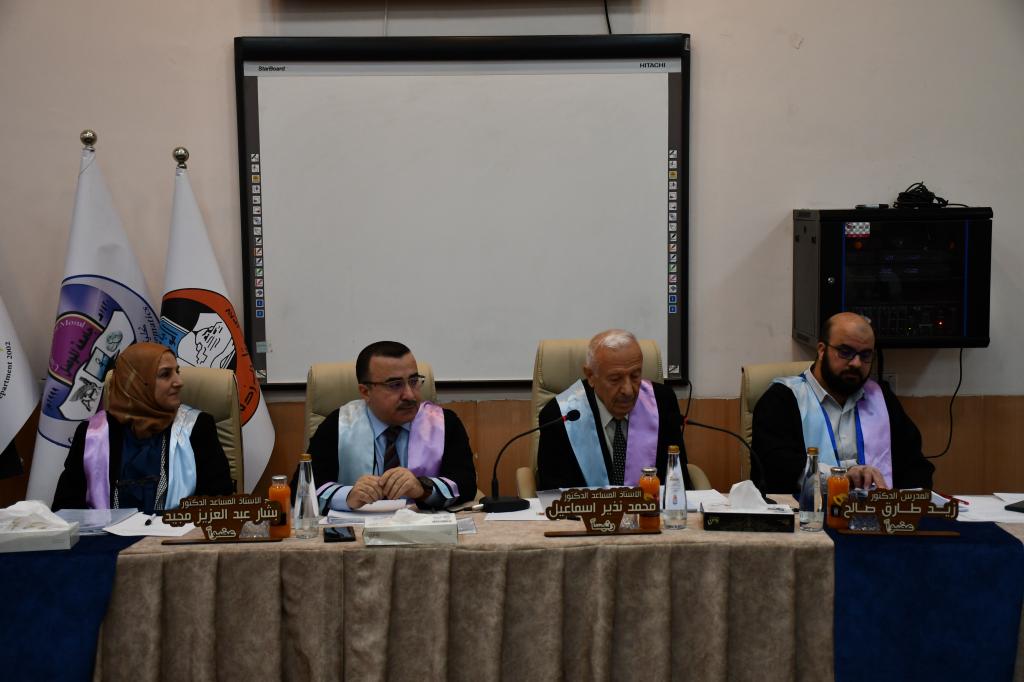 Discussion of a master's thesis in the College of Computer Science and Mathematics - Department of Statistics and Informatics entitled (Base's estimation of the Gompertz model with the presence of autocorrelation with the application on the number of infections with the COVID-19 epidemic)
A master's thesis was discussed at the College of Computer Science and Mathematics at the University of Mosul on Sunday, May 15-2022, on estimating the parameters of the Gompertz growth model for student Hisham Maher Younes, under the supervision of Assistant Professor Dr. Ban Ghanem Al-Ani.

This study dealt with one of the types of growth models commonly applied, which is the Jimbertz model, where the results of the study showed that the estimated model passed the statistical tests represented by (t) tests for the significance of the estimated parameters, and the (F) test for the significance of the model as a whole through the analysis table of variance as well as the high value of the coefficient of determination , that the model was appropriate for the cumulative daily infections of the new Corona epidemic COVID-19 in Iraq during the period from 24/2/2020 to 1/2/2021,Where the cumulative number of injuries by the end of the period was (620,799). And because we are dealing with the cumulative numbers of the epidemic, and this makes the cumulative injuries depend on each other over time, which leads to the inevitability of the emergence of the problem of self-correlation in the remainder of the estimated model, which makes the model capabilities inefficient, that is, it does not have the least variances. To address this problem, the general linear model was formed in which the number of independent variables is the number of model parameters and represents the partial derivatives of the response variable in the Gompertz function for each parameter, and the dependent variable is the response variable minus the value of the function after substitution with the initial values ​​of the parameters.And then using the Cochrane-Orccutt method, which uses the differences in the independent and dependent variables, in addition to the estimated autocorrelation coefficient. Also, the Pezvi method was used to estimate the parameters of the model based on the available prior information about the model parameters and the autocorrelation coefficient of errors, where the Laplace transform of the subsequent probability density function that was obtained was used and approximated to the multiple normal distribution for the purpose of estimating the parameters of the Jumpertz model depending on the value of the subsequent mode. The results of the study showed that there is a convergence between the results of estimating the Jimberts model by the two methods of ordinary least squares (linear) and the Bayes method.