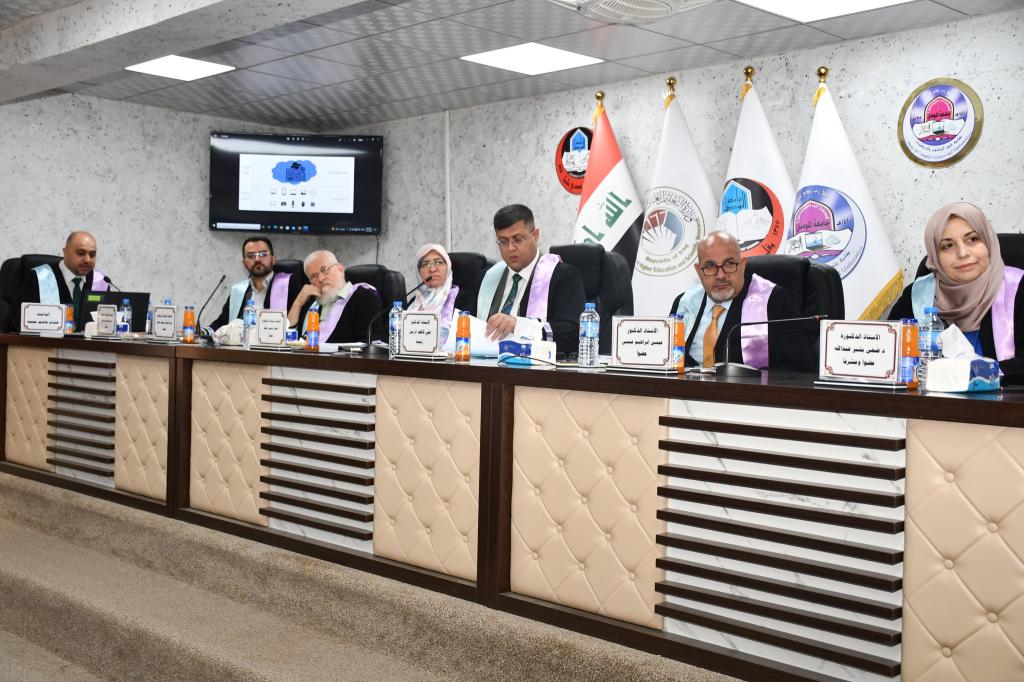 Discussion of a Ph D. thesis in the Faculty of Computer Science and Mathematics - Department of Computer Science
titled:
(Real Time Smart Framework for Big Data Traffic Management Based on Fog Computing)
In continuation of the scientific research movement, a distinguished doctoral thesis was discussed at the College of Computer Science and Mathematics at the University of Mosul on Thursday 22-9-2022, tagged with: (An intelligent framework in real time for managing large data traffic based on fog computing) for the student Hisham Hashem Muhammad and under the supervision of Professor Dr. Duha Bashir Abdullah.
The thesis submitted by the student dealt with building a smart simulator to manage server loads in real time for fog computing applications called (DHFogSim).

The proposed framework (DHFogSim) is based on the proposal and use of multi-level queuing in the Ethernet layer instead of a single queue where all these queues are managed using the Round Robin mechanism. The proposal of an intelligent agent layer has been addressed in this thesis
smart agent layer
Located between user devices and fuzzy devices, the objective of this layer is to distribute the loads coming from user devices to the multiple queues that have been proposed and implemented in fuzzy devices based on the specification of the tasks to be performed.
The proposed environment was built using (OMNET++) and to speed up the work, the Parallelism principle was used when building the proposed environment, and experiments were carried out on a server (HPe ProLiant dl380 generation 10) consisting of 40 cores,This work has contributed to the acceleration of processing and dealing with the huge amount of data, which generated up to 20GB of data every 5 seconds.
To evaluate the proposed (DHFogSim) framework, the traffic management system was simulated with multiple experiments, where the experiments consisted of (200,400,600,800,1000) users respectively, and the results obtained were compared with simulation of the same experiments on (mFogSim) framework. According to the obtained results, it was observed that the proposed framework (DHFogSim) reduces task delay for fog moderators, fog nodes and task latency. In addition, there is an improvement in handling the case of dropped packets.The discussion committee was chaired by Prof. Dr. Ali Kadhim Idris (Babylon University - College of Science for Women) and the membership of Prof. Dr. Issa Ibrahim Issa (University of Kirkuk, Faculty of Computer Science and Information Technology), Assistant Professor Dr. Abdul Sattar Muhammad Khader (Northern Technical University/ Technical Institute/ Mosul), Assistant Professor Dr. Asmaa Yassin Hammo and Assistant Professor Dr. Bassem Muhammad Mahmoud.
Under the supervision and membership of Prof. Dr. Duha Bashir Abdullah