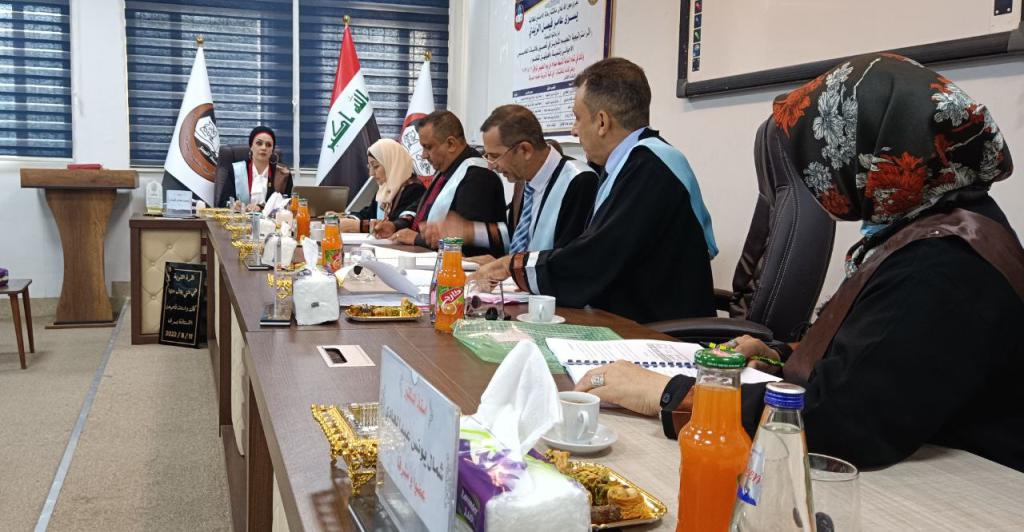 The College of Education for Pure Science, University of Mosul, has done the Master Thesis Viva entitled " The effect of the differentiated education strategy on the achievement of the fifth biology students and the development of their motivation to learn

On Thursday, August 11, 2022, the respected Dean of the College, Assistant Professor Dr. Qais Ismail Ibrahim, the Honorable Scientific Associate and Administrative Associate, the Honorable Head of the Department of Biology, and a number of the college's teachers were attended the viva.

This study, presented by the M.Sc. Student Yousra amer faisal in the Department of Biology, endeavors to identifying the "effect of  discriminate learning on the acquisition of the fifth grade (scientific) female students and the development of their motivation to learn"

To achieve the objectives of the research, eight zero hypotheses were put forward by the researcher that were submitted to experimentation by selecting the experimental design in the two equivalent groups (the experimental group and the control group) with a pretest and posttest. The researcher selected the sample of the study deliberately from Mosul Secondary School for Girls, one of the schools of Nineveh Directorate of Education to be the domain of executing the experiment. The sample included (70) female students distributed to two groups (35) student for each of them. Equivalence between the two groups students was conducted statistically using Chi square and T test for the variables: (The education acquisition of biology subject for the fifth class for the academic year (2021-2022), the students' age in months, the educational level of the fathers, the educational level of the mothers, equivalence in the general average mark and the equivalence in the pretest of motivation). There were no significant difference between the two groups in terms of these variables.

After the subject to be taught was specified, the researcher formulated (40) behavioral objectives of the subjects and prepared the teaching plan for both groups.

To achieve the objective of the research and to test its hypotheses, the researcher had to prepare two tools; the first is acquisition test, which consists of (40) objective paragraphs with the form (the choice from multiple, coupling and complement) and the paragraphs were accepted by the experts with a percentage of 85%). The researcher determined the difficulty coefficient with a value of (0.25-0.54) and the distinguishing power of the paragraphs with a value of (0.31-0.68). as for the invariability, the value was (0.838). the second tool was the motivation scale, which consisted in its final form of (44) paragraphs with three alternatives (to a great extent, medium, poor) and the scale was accepted by the expert with a percentage of (85%) and the invariability coefficient of the scale was (0.874) and the distinguishing power was calculated.

The researcher taught the subject to both of the groups and in the end of the experiment the researcher applied the acquisition test and motivation scale to the students of the two groups of the research. The SPSS package was used to process the data statistically and the results showed the following:

The researcher submitted a set of recommendations, most important of which are the following: