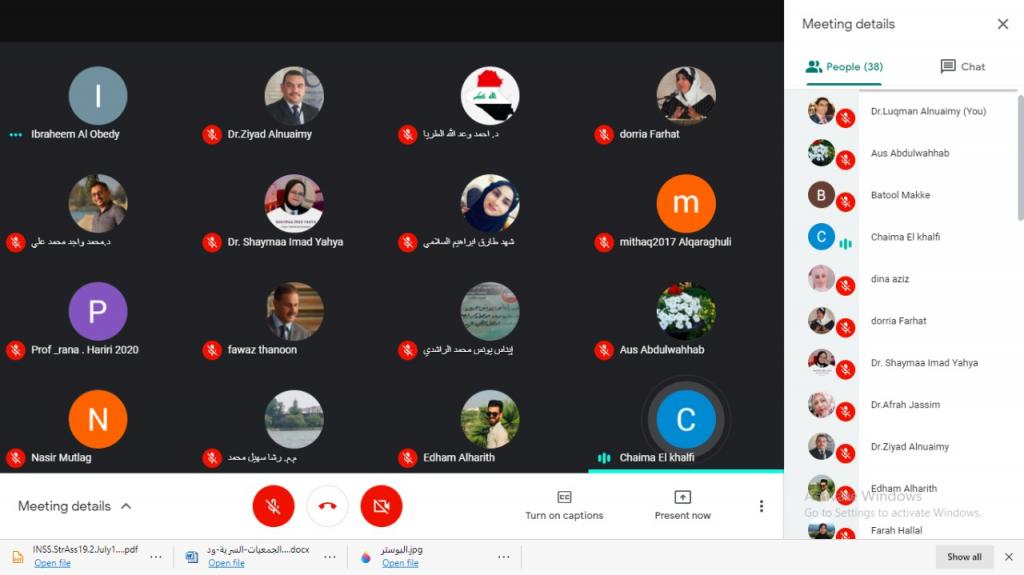 On the occasion of the International Literacy Day, the Public Policies Department at Regional Studies Center held the hypothetical international scientific symposium under the title : (the spread of illiteracy in the world and ways to address it), on the "meet" platform on Tuesday, September 8, 2020, in the presence of many professors and academics from inside and outside Iraq.
The first session was chaired by Dr. Mohammad Abdul-Rahman Al-Obaidi, the first paper of which was titled "Literacy and its Implications for Achieving Sustainable Development" by Dr. Nagham Hussein Nemaa - Dean of the College of Business Economics – Al-Nahrain University, Iraq. The second paper was titled "Illiteracy between Concept and Reality - Lebanon as a case study" by Dr. Dorriya Kamal Farhat - Lebanese University - Lebanon.
While the third paper was called “Psychological and Educational Implications Resulting from the Spread of Illiteracy in Iraqi Society (Causes and Solutions)” by Dr. Ahmad Wadallah Ahmad - College of Education for Human Sciences, University of Mosul – Iraq; the fourth paper was entitled “Collective Experience for Literacy in Morocco” by Dr. Sabah Al-Amrani - Ibn Ghazi Center for Research and Strategic Studies - Kingdom of Morocco.
As for the second session, it was managed by Dr. Ahmad Salih Aboush. The first paper in it was named "Illiteracy in Iraq: Its Causes and Treatments" by Dr. Fawaz Mowafaq Thannoon - College of Education for Human Sciences - University of Mosul - Iraq. While the second paper was titled “Logical Fallacies in the Thought of the Arab Intellectuals - Dealing with Western Concepts as a case study” by Dr. Mithaq Khairallah Jallud - Regional Studies Center - University of Mosul - Iraq.
The third paper was defined as " Cognitive Illiteracy " by Dr. Faris Turki Mahmood - Regional Studies Center - University of Mosul - Iraq. Finally, the fourth paper was described “Basic Concepts of Adult Education in Literacy” delivered by Mr. Mustafa Mubarak Saleh Al Qasimi - Sultanate of Oman.
In conclusion, there were interventions by the attendees on the topic of the symposium; then
the recommendations were delivered by Dr. Rayyan Thannoon Mahmood Al-Abbasi - Regional Studies Center - University of Mosul.