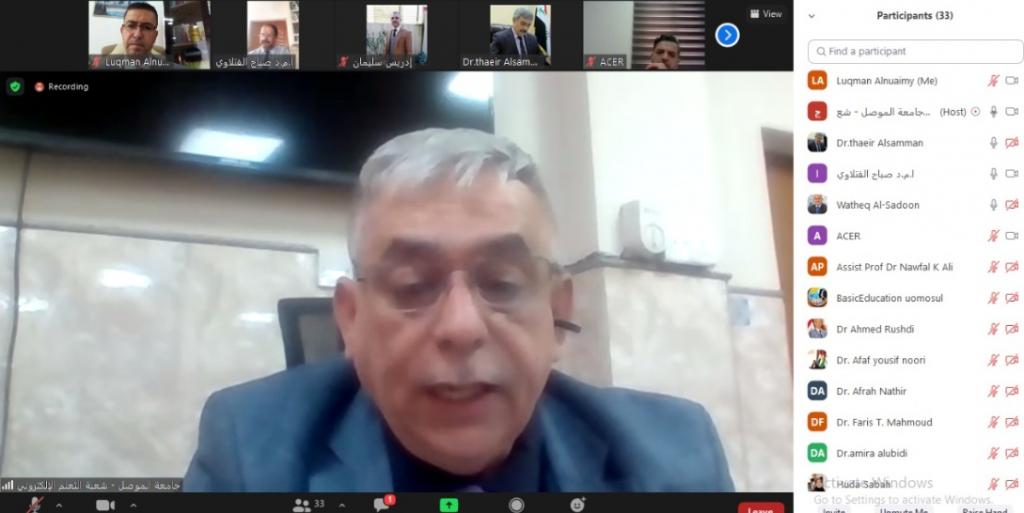 Under the patronage of the Minister of Higher Education and Scientific Research, Prof. Dr. Nabil Kazim Abdul-Sahib, and the supervision of the President of Mosul University, Prof. Dr. Qusay Kamal Al-Din Al-Ahmadi, Regional Studies Center held its ninth international scientific conference entitled (Iraq after 2003: the state, society, economy, law, foreign relations: challenges and opportunities), in cooperation with the House of Iraqi Expertise Foundation during the period 27-28 June 2021 electronically in the presence of the Secretary-General of the Iraqi Parliament, Prof. Dr. Sirwan Abdullah Ismail, Chairman of the Supreme Committee of the Conference, and with the participation of professors, researchers and those concerned with the subject of the conference. The conference aimed to review the reality of the political and economic situation in the Iraqi arena after 2003 and the most important recommendations proposed in this regard. During its sessions, within the political and economic axes, the conference involved topics of great importance: Iraq's return to its Arab and international environment: challenges and opportunities. Education retreat between its pivotal role in the development and the responsibilities of economic decline.Towards a new approach in the security dimension of Iraqi-Turkish relations. Political problems and obstacles in Iraq after 2003 and future options. State Building and paths of influence in foreign policy: a case study of Iraq.The strategic pillars of Iraqi national security; a prospective study. Iraqi parliamentary elections; an approach between the philosophy of democracy and pragmatic mechanisms. Iraqi society; the collapse of controls and openness to the unknown. European Union policy towards Iraq after 2003.Iraq's location in light of the Arab-Israeli peace agreements. The position of the United States of America and Turkey toward the Iraqi situation after 2011 and its reflection on the relation between the two countries. Iraqi - Saudi relations after 2003 in the political field.Iraqi-Gulf relations after 2003. Iraq's foreign policy between the dynamics of the strategic environment and the effectiveness of aspiring regional powers after 2011. Iraqi-Qatari relations after 2017.An analytical vision of the economic reality in Iraq; challenges and opportunities. Investing in Iraq after 2003; reality and ambition. The service sector in Iraq after 2003; opportunities, challenges, and ways to advance.Legal aspects of the work of Islamic banks in Iraq. The economics of water security is a path to achieving a green economy in Iraq. Analysis of the trend of the Iraqi banking sector indicators after 2003; reality and premises for reform. Successful strategic leadership practices in achieving administrative creativity.

In conclusion, the conference came out with a set of recommendations included in the papers of the researchers participating in this scientific forum, the most prominent of which is strengthening the concept of citizenship and loyalty (Iraq) for the Iraqi individuals. Laying firm foundations for Iraq’s foreign relations with neighboring countries based on respect for relations, good neighborliness, and interests that serve Iraq first and last. Controlling Iraq's borders with all its neighboring countries in a way that maintains and enhances its national security. Encouraging investment in various service sectors in the country. Creating environmentally friendly projects that maintain water security and achieve a green economy.